(With director Alexandre Aja’s Crawl newly arrived in theaters, here’s a reprint of the original June 8, 2005, review of what remains his most notorious film.)

THURSDAY, MAY 26 — Tonight, I went to see an advance screening of a new thriller called High Tension, which doesn’t open locally until June 10.

Arriving 30 minutes before the 7:30pm start time, I chatted for a while with the monitor, the person hired by the studio to orchestrate the screening, gauge audience reaction and save seats for the press. Only tonight, there was no need to save seats, as the auditorium was pretty empty. Since this was a word-of-mouth screening (i.e., no radio station push) and since the word Sith wasn’t in the movie’s title, only about 60 people showed up.

The monitor and I tried to figure out if the movie we were about to see would be dubbed or subtitled. After all, this is a French import that has already played other parts of the world (including England, where it was retitled Switchblade Romance). It’s been shown in both its original language and dubbed English; what’s more, it’s already available on DVD in some parts of the world. My buddy whose DVD player is equipped to handle international discs offered to let me borrow his copy, but I figured I’d go ahead and hoof it to this actual theatrical showing.

A pair of other area critics soon arrived, and the movie started right on time (well, 7:31, close enough). It was immediately apparent we were getting the dubbed version, because the leading characters were speaking in the sort of awkward English inflections usually employed in shoddy, chopsocky flicks from the 1970s. Still, being subjected to the dubbed version wasn’t exactly a surprise: American audiences are notorious for their disdain of reading subtitles, and since Lionsgate is hoping to capture some of those big summer bucks, it makes sense the company would be tossing out the English-language edit.

Speaking of “tossing,” one of the first sequences finds a portly, filthy guy (Philippe Nahon) in mechanic’s garb and a baseball cap apparently pleasuring himself in the driver’s seat of his eyesore of a truck. But a closer shot reveals that he’s actually receiving head from a brunette. And I mean “receiving head” literally — after he’s through, he tosses what turns out to be the severed head of a pretty young woman out of his truck window. At this point, murmurs emanate from a clearly unsettled auditorium, leading the critic sitting next to me to lean over and whisper with a grin, “I think this audience is just now getting what sort of movie they’re in for.” To which I replied, “Yeah, even if the movie blows, this…” — motioning to the theater around me — “is gonna be great!”

During the opening moments, the movie has also introduced us to the heroine, Marie (Cécile De France), and her friend Alex (Maïwenn). They’re heading out to visit Alex’s parents and her little brother in the French countryside, yet it isn’t long after their arrival — and Marie’s lengthy masturbation in the guest bedroom — that the repulsive man comes knocking on the door. First, he dispatches the dad by slicing him with a hook and crushing his head with a dresser. Then he gets busy on the mom, using a straight razor to saw off her hands and cut a groove in her neck so thick, you could use the resultant gap to store food recipe cards. Then he rapes the chained-up Alex as Marie tries to figure out a way to rescue her captive friend.

By now, we were 40 minutes into the movie, and the critic sitting a couple of seats down the aisle abruptly stood up, declared, “I have a life,” and headed for the exit. It was a noteworthy moment, as critics rarely walk out on a movie. It’s like seeing an actual music video played in an acceptable time slot on MTV, or hearing about a Republican Congressman supporting an increase in the minimum wage. The two of us remaining were envious our colleague now had a free evening, but we elected to hold our ground. After all, there were slivers of genuine style to be found in writer-director Alexandre Aja’s approach — here was a man who, for better or worse, was trying to deliver a no-holds-barred exercise in grueling horror, and he obviously had the technical savvy to back him up. Besides, for those who don’t mind “feel-bad” excursions into the deranged minds of murderers, there have been worthy titles: Michael Powell’s 1960 Peeping Tom and John McNaughton’s 1986 Henry: Portrait of a Serial Killer spring to mind. But at this 40-minute mark, psychological complexity was a no-show, as the murderer went through the motions as mechanically as the slashers in the Friday the 13th and Halloween franchises. So far, the movie hadn’t been scary, suspenseful, thought-provoking or — heck — even remotely entertaining. Maybe the second half will be better, I hoped. 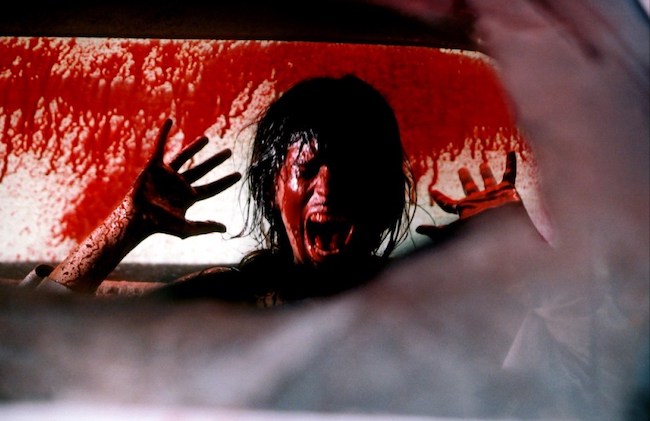 Or maybe not. The rampaging psychopath proceeds to kill the little brother — thankfully off-camera, though Aja later feels the need for the camera to lovingly hover above his blood-stained corpse. And as if this film didn’t already include enough crimson tides, an innocent bystander gets axed squarely in the middle of his chest. “This movie creates a dilemma,” I cracked to my fellow scribe, since I wasn’t particularly interested in what was occurring on screen. “Should I take my 13-year-old daughter to see this or Madagascar?”

As the unpleasantries continued, more people headed for the doors, including a clump of five at the 60-minute mark. “That’s 10 people so far,” I commented. “Wait, make that nine. There’s a guy returning with a large tub of popcorn.”

All the unrelenting gore gave this guy the munchies?

“This movie made him hungry?” echoed the other critic, incredulously. “I may never eat again after watching this.”

All told, 12 of the 60 patrons ended up walking out before the closing credits. I don’t think I’ve ever been at a sneak preview that lost a full 20 percent of its clientele. I’m sure that’s not the sort of word-of-mouth the studio was hoping for.

I looked at my watch, realizing the 90-minute running time was almost up. But first, Aja managed to cram in a car chase, a chainsaw massacre, a club made out of barbed wire, and a lesbian clinch to wash it all down with (this film’s view of homosexuality is even more offensive than what’s depicted in Red State-pandering films like The Longest Yard). And, of course, Aja had to include the by-now obligatory twist ending, the one that makes viewers question everything they had witnessed up to that point. Yet this exact twist had already been used in two other films in the past 15 months (so much for out-of-left-field originality), and its employment here was especially imbecilic.

At least the screening’s over, I’m back at home, and it’s time to go to bed. In the next few days, I’ll have to find some way to extract a 1,200-word review from this dismal experience. I wonder if I can get away with a six-word review? Then I can just quote the patron who turned to me as the lights went up and muttered, “What a total piece of crap.”