Movie and TV collections to give to friends, family … or yourself.

In these cash-strapped times, the point of a holiday gift guide is often to showcase quality items offered at low prices, thus allowing consumers to blanket friends and family members with affordable presents while retaining a few bills in the wallet.

The majority of the titles highlighted here, hailing from the worlds of both cinema and television, won’t be found anywhere for dirt-cheap — in other words, don’t rummage through a Walmart bin expecting to come across one of these puppies for a mere $4.99. These aren’t gifts for casual acquaintances or distant relatives, but rather for those near and dear to your heart.

Whether your loved ones deserve such extravagance is up to you, but these offerings won’t disappoint … at any price. As broken down below, they each offer hours of quality entertainment as well as ample bonus features.

On second thought, maybe it’s best to buy these gifts for yourself after you’ve spent all those rolled pennies on everyone else. After all, charity begins at home — or, in this case, at your home entertainment center.

(Note: The retail prices are included as starting points only. Obviously, most of these titles can be found for lower costs on numerous websites, sometimes even the sites of the distributors themselves.) 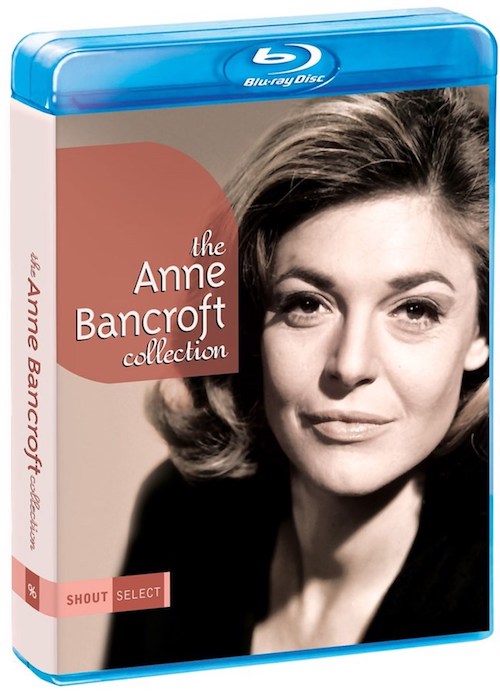 The Scoop: Academy Award-winning actress Anne Bancroft has never had a Blu-ray set devoted exclusively to her works, but this 8-disc collection remedies that. What’s great about this collection is that the content was curated by Bancroft’s husband, Mel Brooks, so it’s packed with worthy titles that best showcase her talents. Don’t Bother to Knock (1952) marked her film debut (opposite Richard Widmark and Marilyn Monroe). The Miracle Worker (1962) highlights her superb, Oscar-winning performance as Helen Keller’s teacher Annie Sullivan. The Pumpkin Eater (1964), The Graduate (1967) and Agnes of God (1985) are three of the other four films for which she earned nominations (the only Oscar nom no-show from this set is 1977’s The Turning Point). Fatso (1980) marked Bancroft’s only stint as writer-director-actress. To Be or Not to Be (1983) finds her starring opposite her beloved Mel. And 84 Charing Cross Road (1987) is a little gem co-starring Anthony Hopkins. For some background info on Bancroft, the set also includes a 20-page booklet.

Extras: Not surprisingly, the lion’s share of bonuses can be found on The Graduate; these include audio commentary (from 2007) by director Mike Nichols (who won his Oscar for this picture) and filmmaker Steven Soderbergh; a 1992 retrospective making-of piece; a 2015 interview with Hoffman; and screen tests. Extras on other films in the set include interviews, isolated score tracks, and theatrical trailers. 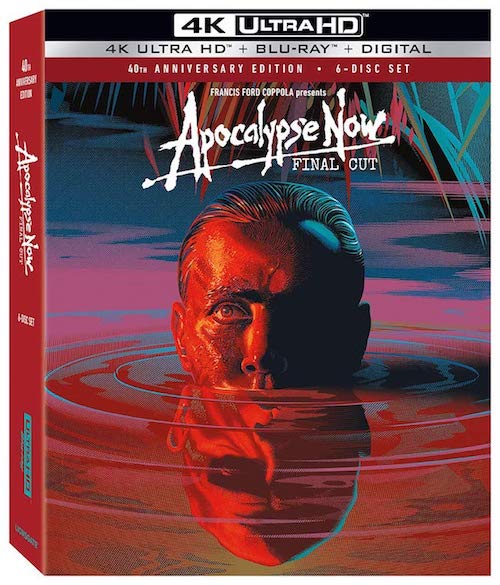 The Scoop: There’s certainly been no shortage of Apocalypse Now on disc, from editions of the 1979 theatrical cut of Francis Ford Coppola’s Vietnam War masterpiece to versions of the 2001 extended cut known as Apocalypse Now Redux. But this 6-disc endeavor tops them all, as it offers the 153-minute theatrical version, the 202-minute Redux version, and now the 183-minute Final Cut, which, as the running times note, finds Coppola trimming some of the Redux material to fashion what one assumes is his preferred (and last) version. What’s more, this handsome box set also contains the three movies in both 4K Ultra HD and Blu-ray. As in many previous video incarnations, this also includes the excellent 1991 making-of documentary Hearts of Darkness: A Filmmaker’s Apocalypse.

Extras: Apocalypse Now Final Cut is packed with tons of bonus features including several items new to this release. Extras include an introduction to the Final Cut by Coppola; audio commentary by Coppola on Apocalypse Now Redux and Hearts of Darkness: A Filmmaker’s Apocalypse; deleted scenes; 8mm behind-the-scenes footage; and pieces on the editing and the sound design. 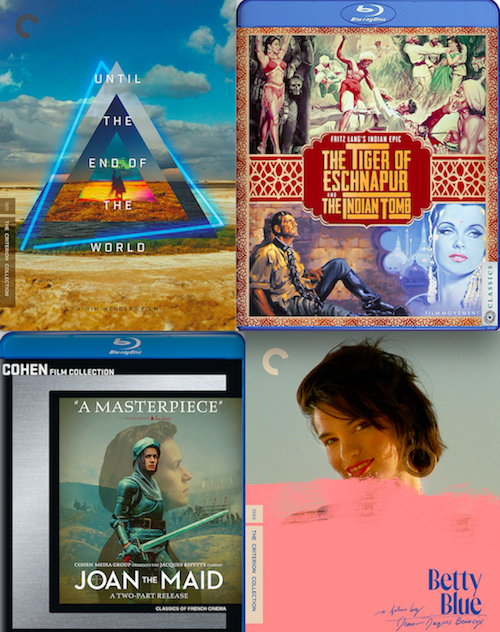 The Scoop: Various labels devoted to classic and independent cinema have opted to recently release ultra-lengthy pictures on Blu-ray; thus, these offerings aren’t part of multi-title box sets, but with each picture clocking in at over 3 hours, there’s no chance anyone’s going to feel shortchanged. The Cohen label is offering Jacques Rivette’s 1994 two-part drama about Joan of Arc, Joan the Maid (336 minutes). Criterion counters with the director’s cut of 1986’s Betty Blue (185 minutes), about an increasingly disturbed young woman, and the director’s cut of 1991’s trippy science fiction saga Until the End of the World (287 minutes). Lastly, Film Movement unearths Fritz Lang’s Indian Epic (203 minutes), the great filmmaker’s 1959 two-parter (separately titled The Tiger of Eschnapur and The Indian Tomb) about a love triangle.

Extras: Bonus features on Joan the Maid consist of trailers. Extras on Betty Blue include a making-of piece; a 1986 interview with director Jean-Jacques Beineix and star Beatrice Dalle. Bonuses on Until the End of the World include a new introduction by director Wim Wenders; a behind-the-scenes featurette; and deleted scenes. Extras on Fritz Lang’s Indian Epic include audio commentary by film historian David Kalat and a piece on star Debra Paget. 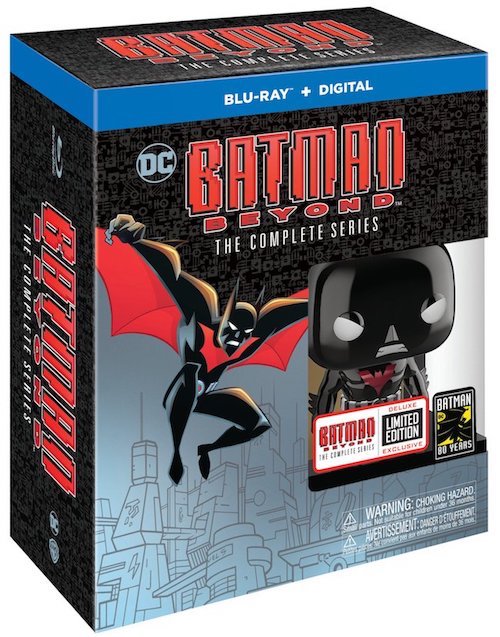 BATMAN BEYOND: THE COMPLETE SERIES

The Scoop: Although it only lasted three seasons and 52 episodes, few animated series have proven to be as influential as Batman Beyond (1999-2001), the brooding Bat-project that finds young Terry McGinnis becoming the new Caped Crusader under the mentorship of no less than Bruce Wayne. Warner Bros. and DC have produced a spectacular Limited Edition box set honoring the show, with the 6-disc collection sharing space in a bulky box with other goodies — namely, the chrome Batman Beyond Funko Pop! and four lenticular cards featuring artwork. As for the discs, they contain not only the entire run of the series but also the 2000 feature spin-off, Batman Beyond: Return of the Joker (with Mark Hamill reprising his series role as the Crown Prince of Crime). With only 50,000 copies of this box set in release, now’s the time to nab it for gift-giving or, better yet, gift-keeping.

Extras: There’s an incredible amount of content packed into this set, including a new roundtable discussion with key personnel from the series (including voice actors Kevin Conroy and Will Friedle); a look at 80 years of Batman; the 2010 documentary Secret Origin: The Story of DC Comics; audio commentaries on four select episodes and Return of the Joker; and behind-the-scenes featurettes. 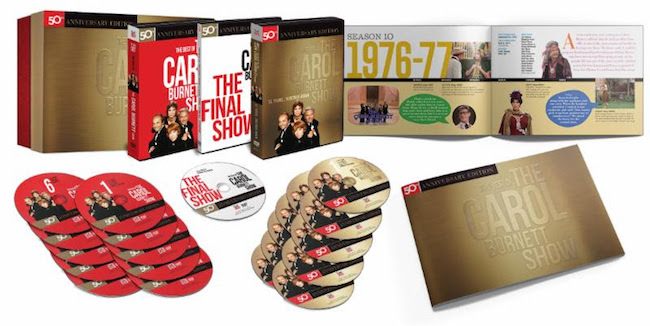 THE BEST OF THE CAROL BURNETT SHOW

The Scoop:  Indisputably one of the most beloved TV shows of all time, The Carol Burnett Show ran for 11 seasons (1967-1978), and, over the course of that decade-plus, its star emerged as a permanent fixture on the television landscape. Backed by such reliables as Harvey Korman, Vickie Lawrence, Tim Conway and Lyle Waggoner, Carol anchored a variety show that included plenty of song and dance but remains primarily known for its comedy sketches. Beginning in 2017, Time Life started releasing various DVD sets to commemorate the show’s 50th anniversary; now, the most mammoth of all collections is being offered at retail. This 21-disc set includes 60 of the most popular episodes from all 11 seasons. The cost for this Burnett behemoth is $249.98, and if that’s mere pocket change, then you might consider the VIP Edition signed by Carol herself — that one can be snatched up for $399.95. Conversely, for those looking for sets in the other direction, there’s an 11-disc set (33 episodes) for $99.95, a 6-disc set (16 episodes) for $59.95, and the 1-disc The Final Show for $12.95.

Extras: Extras consist of interviews with Burnett, Conway, Lawrence, and others; a pair of retrospective featurettes; a cast reunion; and never-before-seen outtakes. 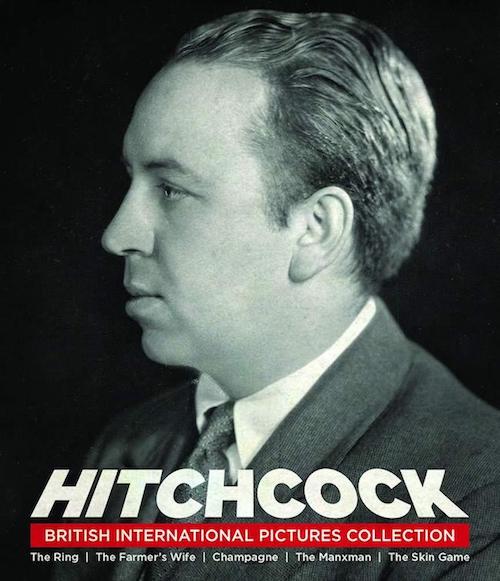 The Scoop: The Hollywood contributions of Alfred Hitchcock — as well as most of the British pictures he helmed right before heading for our shores — have been well-protected by their respective studios, but that’s not always the case with his earliest titles, many of which weren’t properly copyrighted and thus fell into the public domain. But those film aficionados tired of seeing such movies via visually and aurally awful DVDs can take heart at the recent efforts of the Kino Lorber label. Earlier this year, the outfit released restored editions of The Master’s Blackmail (1929) and Murder! (1930), and now it’s seen fit to present five other titles in one 2-disc collection. Those expecting thrillers in the classic Hitchcock mold might be disappointed, since the movies comprising this quintet (four silent, one sound) were made while he was still test-driving various genres. Thus, the package includes two dramas centered on love triangles (1927’s The Ring and 1929’s The Manxman), two comedies focusing on families (1928’s The Farmer’s Wife and 1928’s Champagne), and one melodrama (the 1931 talkie The Skin Game).

Extras: Bonuses include audio commentary on The Ring by film critic Nick Pinkerton; audio commentaries on Champagne and The Manxman by film historian Farran Smith Nehme; and audio excerpts from the Hitchcock/Truffaut interviews.