Skip to content
Unprescribed: A Bitter Pill to Swallow
Reviews

Unprescribed: A Bitter Pill to Swallow

The vintage clips in the documentary Unprescribed aren’t plentiful, but they are judiciously chosen. Here’s President Ronald Reagan in 1980 declaring that “Marijuana … is probably the most dangerous drug in the United States.” In a PSA, here’s Adrienne Barbeau, known for such horror flicks as The Fog and Creepshow, backed by haunting music as she intones, “Drugs. It’s a bloody shame.” And in another PSA, here’s David Hasselhoff, in character as Michael Knight from the hit TV series Knight Rider, discussing drugs with his talking car K.I.T.T. before emphatically stating that “Marijuana has more cancer-causing agents than tobacco.”

Like other recent marijuana-centered documentaries such as 2017’s Mary Janes: The Women of Weed and 2018’s The Hemp Road Trip, Unprescribed hopes to cut through all the hysteria and fabrications prevalent during the past 80 years by focusing on the benefits of pot. In this case, it’s examining how the drug can be a lifesaver for combat veterans suffering from PTSD.

One interviewee is Joshua James Frey, who returned from Iraq injured and requiring 22 surgeries in a span of 18 months. To help him cope, military doctors would prescribe a cocktail of pills that did nothing but deaden his senses and turn him into, in the words of his wife Sarah, “a shell of a human being.” The pharmaceuticals were a failure; it was only when Joshua smoked pot that he began to feel good about himself and the world around him. “On the occasions when he would smoke marijuana,” reveals Sarah, “I would start to catch glimpses of the person I fell in love with.” 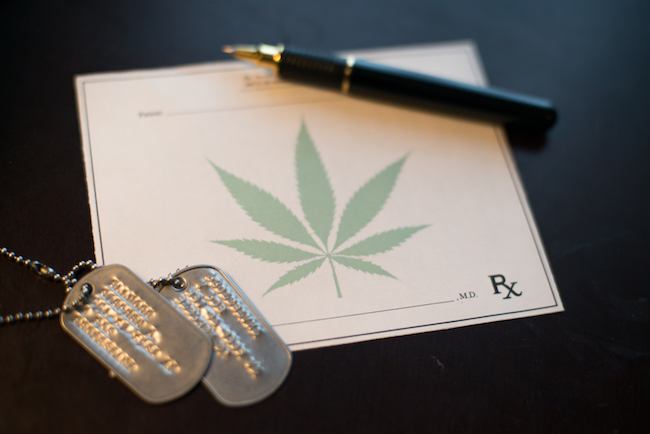 Boone Cutler tells a similar story. A roughneck who joined the military not to serve his country or help people but because he “wanted to get into a good gunfight” and “win a fight to the death,” his return stateside also found him confronted with doctors whose solution was to hand him all manner of medicine. As Boone confesses, “So I still have all the injuries and all the problems, but now I have a huge drug problem on top of it.” When a co-worker suggests he try marijuana to help him sleep, he’s offended at the suggestion. But with nothing to lose and sleep to gain, he reluctantly tries it and wakes up from the best sleep he’s had in years.

The most moving story in Unprescribed belongs to Janine Lutz, whose son Johnny never got to try marijuana and who, according to her, probably wouldn’t have anyway since it was illegal. Instead, he was prescribed Klonopin and had to stop using it because it made him suicidal. But there wasn’t proper documentation to show that the drug was off-limits, so it was again prescribed and Johnny ended up killing himself. (This is enough heartbreak for one lifetime, but Janine later reveals another devastating tragedy related to this one.)

Some might bristle at the film’s myopic viewpoint — surely there have been some servicemen and women who have benefited from taking prescribed drugs? But there’s no denying Unprescribed’s ability to demonstrate how, yet again, the resistance in many quarters to the legalization of marijuana, particularly for medicinal purposes, is infantile, outdated, and even dangerous.

(Unprescribed is now available on Amazon Prime, UrbanflixTV, and other streaming services. It is also available on DVD; go here to purchase.)